Tlazolteotl: The Goddess of Filth 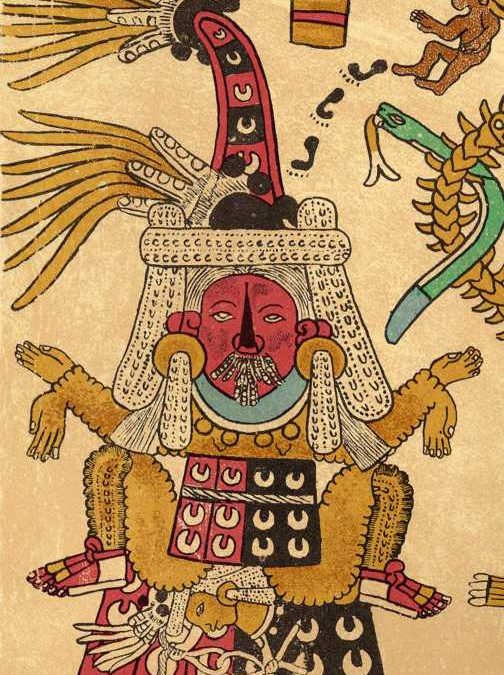 My heart is a flower, the corolla opens;
Ah! It is the mistress of midnight and She has arrived
Our Mother, the Goddess Tlazolteotl.
(Hymn to Tlazolteotl, from Baéz-Jorge 101)[1]

She is easily identified, usually with black around her mouth, sometimes with a conical hat or riding a broom, and often squatting in a birth-giving posture.
Tlazolteotl is one of the most endearing and complex goddesses of the Mesoamericans.

Her name is derived from the Nahuatl word for garbage, tlazolli, literally “old, dirty, deteriorated, worn-out thing … which was used to connote filfth, garbage, or refuse, all of which subsumed human waste products” (Klein 21). Tlazolli could also refer to profligate behavior, related to the root for quail (zolli), a bird associated with fertility and the earth “owing to its tendency to keep close to the ground and to its prolific breeding habits” (Sullivan 11). Indeed Tlazolteotl both provoked and pardoned licentiousness, explaining Her moniker “The Eater of Filth.”

The second part of Her name, teotl, signifies a deity, and in this generic form could refer to male or female. However, Tlazolteotl is almost always considered female. The early Spanish clerics compared Her to the Roman Venus because of Her connections to sexuality. Tlazoltetol not only encompasses illicit love, overindulgence, and dissolute behavior but also is the pardoner for those who engage in Her excesses.

Tlazolteotl is considered a lunar and agrarian Goddess. She is identified with the trecena [2] of the ritual calendar that begins with the day Ce Ollin, or First Movement. She is associated with the day sign of the jaguar. She was honored by the peoples of eastern coastal Mexico, the Huastecs, Mixtecs, and Olmecs, as well as the Aztecs of central Mexico. She was known by various names, including Tlazolteotl-Ixcuina and Tlazolteotl-Tlaelquani, indicative of Her many aspects.

Fertile and Generative Black
Tlazolteotl-Ixcuina originated in the rich fertile areas of the Huastec peoples in the lands bordering the Gulf of Mexico in the modern states of Hidalgo, Veracruz, San Luis Potosí and Tamaulipas. The Huastec region is a rich fertile area, especially known as a cotton growing region, with a long history of trading with Central Mexico. In a statue from post-Classic Huastec, Tlazolteotl-Ixcuina wears a conical hat indigenous to this region.
On page 39 of the Codex Borgia [3], a ring of Cihuateteo (women who died in childbirth and were deified) dance around two figures. The Cihuateteo wear the typical red and black skirts and huipils of Tlazolteotl, adorned with crescent moons. The shells on their skirts, as well as the typical Huastec crescent moon nose ornament, connect them with the lunar cycles. Though the moon was considered the purview of a male deity, the cycles, the regenerative aspect, and the motion were female.

A number of Tlazolteotl figurines were part of an offering burial in honor of the Cihuateteo. These figurines show Tlazolteotl in Her aspect as midwife. In each hand She holds the bands used in traditional postpartum binding practice.[4] Though more obvious on these figurines in person than in photo, Her mouth is painted black.

In fact, Tlazolteotl’s most distinctive feature is the black on Her mouth and chin. The Olmecs used bitumen, a black viscous material, as paint for decoration on everything from pottery to the human body. Bitumen was chewed publicly only by girls and unmarried women (McCafferty 33)[5].

Spinning, Weaving, and Sex
In her name Tlazolteotl-Ixcuina, the Ixcuina is from the Huastec for “Goddess of Cotton” (Sullivan 12). Her headdress usually includes two spindles of unspun cotton, which connect Her to weaving and to the rich cotton-growing region of the Huastec.

In Mesoamerica, woven cotton textiles were used as a medium of exchange, and women were the principle weavers, bringing money and prestige to the household through their weaving. A spindle full of thread is also called a mazorca, the word for a full ear of corn, as they are similar in form. The strands of cotton that hang from the spindles in Her headdress mimic the tassel on the ear of corn. The life-cycle of corn parallels the cycle of spinning, from waxing to waning, and both parallel the human life cycle (Sullivan 28-29). Cotton had other connections to the female cycle, as the bark of the cotton plant was used for uterine contractions and to induce menstruation (Sullivan 19).

Tlazoteotl-Ixcuina is associated with a four-part sisterhood: First Born, Younger Sister, Middle Sister, and Youngest Sister, each of which is named Tlazolteotl. This quadripartite representation may have lunar aspects, as the four phases of the moon (Baéz-Jorge 100). These sisters were the goddesses of carnality or lust, and the cleric Sahagún writes that “their names signified that all women have an aptitude for carnal acts” (36). I interpret this as an illustration of the female capacity, throughout her life, to embody the sacred cycle of generation, death, and regeneration. And certainly lust, the drive for connection and regeneration, is seated deeply in the female purview, and here most obviously connected to lunar cycles.

Purification and Pardoning
As Tlazolteotl-Tlaelquani, she is the “Eater of Excrement”, the pardoner of sins. Sahagún writes that the old or terminally ill would seek Her because this absolution could only be given once in a lifetime. Her clergy would not only hear confessions and grant absolution but would also find those, especially adulterers, who did not confess and bring them to public punishment. Tlazolteotl was invoked at a new birth, to cleanse a baby of her parents’ transgressions.

From the Tonalamatl de los Pochtecas comes a lovely image of Tlazolteotl. She is nude, wearing an elaborate headdress, and riding a broom. Her headdress includes the usual spools of unspun cotton, as well as a shell, showing her ties with the lunar cycles. She is drawn with a wrinkled paunch, symbolic of a woman who has given birth. She holds a red snake, symbol of the fertility of menstrual flow (Baéz-Jorge 100) The broom is a reference to the Aztec purification festival of Ochpaniztli, which honored the female deities, including Tlazolteotl.

As Tlazolteotl-Tlaelquani, She was the Goddess of the black, fertile earth, the rotting earth, the fecund earth that gains its energy from death, and in turn feeds life. Associated with purification, expiation, and regeneration, She turns all garbage, physical and meta-physical, into rich life.

Embodying the cycle
Tlazolteotl, Goddess of Cotton, Goddess of Filth, Eater of Excrement. She is the regenerative power of the earth, the midwife, and the pardoner. One of the most provocative renditions of Tlazolteotl is from the Codex Borbonicus (see image at top). She squats in the birth-giving position, wearing the conical Huastec hat with tassels, similar to the tassels on new corn. She wears black and red, decorated with crescent moons which, to my eye, mimic the shape of a vulva.

This drawing shows Tlazolteotl conceiving a child (see the child coming from above and to the right, footprints leading to the place of conception, the head), and She births a child who wears a headdress, earrings, and necklace just like her mother. While embodying this cycle of life, Tlazolteotl wears the flayed skin of the sacrificial victim (the dimpled skin always signifies this, but it is very obvious here with the extra hands hanging below), a symbol of death feeding life.

Tlazoteotl is associated with the trecena beginning with Ce Ollin, 1 Movement. The glyph for ollin shows the combining of two elements to form movement, symbolizing the active principle. The symbol for ollin is here as well in the two snakes to the right — one fleshed and the other discarnate. The two, intertwined, convey in vivid detail the interdependence of death and life.