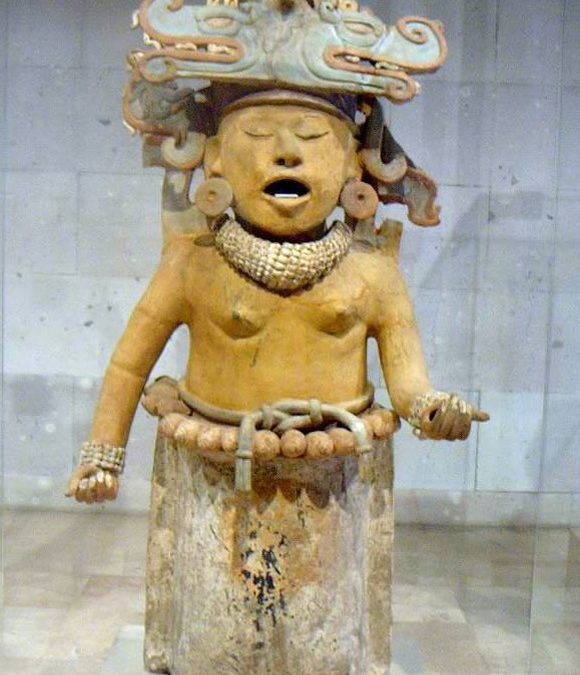 The cosmology of the Mesoamericans presents a lush, complex landscape of deities and ideas. Study of this cosmology, through a particularly feminist lens, reveals powerful female deities. Among the most intriguing are the Cihuateteo[1].

The Cihuateteo (literally “women goddesses”)[2] appear in the pantheon of Mesoamerican cosmology as mortal women who died in childbirth and were then deified[3]. In regular cycles, the Cihuateteo traversed the heavens, the underworld, and the earthly plane. Daily they dwelt with the stars in the western sky in the heavenly region called Cihuatlampa (“place of women”) and accompanied the sun from noon to sunset, then through the night as it lit the underworld[4]. Every 52 days[5] in the ritual calendar[6], the Cihuateteo descended to earth to reign for a day associated with the west. It is the very regularity of the Cihuateteo’s presence that places them habitually in the lives of the Mesoamericans.

In central Mexico, Goddesses were worshipped at cihuateocalli (“goddess houses”) of different sizes and locations. The Cihuateteo were honored in neighborhood cihuateocalli built at the crossroads. During the days of the Goddesses’ descent, their images in the shrines were festooned with paper (amatetéuitl) pegged to the statues with bits of rubber or copal[7]. They were given offerings of tamales[8] and toasted corn, as well as bread shaped as butterflies and lightning rays.

The negative framing of these Goddesses has led to their continued demonization. Modern writings compare them to vampires and other maleficent specters. However, according to the veneration practices of the Mesoamericans, the Cihuateteo are powerful, benevolent and munificent ancestors.

One of the most beautiful tributes to the Cihuateteo was the prayer that the midwife recited at the death of a young mother.[9] In this prayer the midwife cried at the death of her patient, urging the parents to be glad that their child had died in childbirth because she would become a Goddess and accompany the sun as a brave one, a mocihuaquetzque[10]:

My little one, my daughter, my noble woman, you have wearied yourself, you have fought bravely. By your labors you have achieved a noble death, you have come to the place of the Divine. …Go, beloved child, little by little towards them (the Cihuateteo) and become one of them; go daughter and they will receive you and you will be one of them forever, rejoicing with your happy voices in praise of our Mother and Father, the Sun, and you will always accompany them wherever they go in their rejoicing. (Sahagún 381-382)

At the end of the prayer, the midwife exhorted the new Cihuateotl not to forget her and all those left on earth, to remember and aid them as they led their hard lives on the earthly plane. This prayer portrayed the Cihuateteo as benevolent beings, honored and revered.

Throughout this prayer, the Cihuateteo were referred to in militaristic terms. They were called “brave” and extolled for “fighting bravely”, and their daily journey with the sun from noon to dusk mirrored the slain warrior’s journey with the sun from dawn to noon. The Cihuateteo were literally the embodiment of bravery. In fact, warriors would attempt to sever the middle finger of the dead woman’s left hand to use as a talisman to assure their own bravery and success in battle. The midwives and family members who carried her to her grave had to stop warriors from dismembering the body of the Cihuateteo.

The question of why the Cihuateteo were described in militaristic terms and venerated in the same way as warriors who died in battle has been much debated. Melgarejo Vivanco wrote that the Cihuateteo were given the same honor as dead warriors because it helped promote motherhood “with the incentive of deification” (167). A militaristic society, he noted, must be supplied with soldiers. This is a commonly repeated theory.

However, honoring women by comparing them to warriors assumes that warriors had died in battle before women died in childbirth[11]. I suggest that the scenario of the Cihuateteo existed before the culture knew war[12], and that the increasingly militaristic Mesoamerican society may have co-opted a longstanding custom of honoring women who died in childbirth to valorize its practices.

It can then be posited that warriors were given the same status as women who died in childbirth; that as an incentive for warriors to go into battle, they were to be honored as women had been honored for centuries, perhaps millennia. Women dying in childbirth were the exemplars of courage, given the highest honor available to mortals — to journey with the sun. Warriors would share this honor, giving them the same status as the Cihuateteo.

The iconography associated with the Cihuateteo differs in the various regions. The Cihuateteo statues from the state of Veracruz were modeled after the deceased bodies of individual women who died in childbirth. Multivalent symbols appear on these statues: fantastic headdresses represent the sky dragon and the earth monster; bicephalic pit-vipers wrapped around their waists represent internal female organs and attributes of deities associated with death. The vipers are tied in a knot similar to the glyph ollin, which means “movement”.

The most striking aspect of these statues is their humanness. These were real women — the artisans’ contemporaries, possibly their relatives, friends, part of their community. They were rendered as fleshy, corporeal, mortal, real. Every post-mortem detail was captured. I believe it is this humanness that makes these statues a true testament to the deceased women — they were truly revered ancestors.

In contrast, the Central Mexican Cihuateteo do not have individual characteristics; there is little variance among them. These statues are kneeling and have descarnated faces and clawed feet, contrasted with their long, luxurious hair. On the top of some of their heads, a day glyph of one of the days of the Cihuateteo’s descent is designed into the hair. Their belts or snakes are tied in the similar ollin glyph style knot. Their breasts are bared, visible above their knotted belts and skirts.

The Cihuateteo were the beloved and brave women who died in the act of childbirth. The midwife’s prayer assured the mother that her death had not been in vain, that she would be remembered for her act of bravery. The prayer poignantly expressed the bravery of the Cihuateteo, showing their honored place with the sun. There was no doubt that the Cihuateteo were powerful deities. Traversing the celestial, earthly, and underworld spheres and honored in neighborhood shrines, they were an integral part of the spiritual landscape of the Mesoamericans.